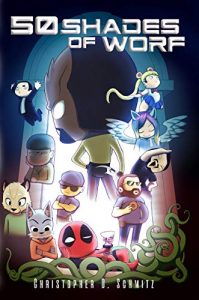 Author: Christopher D. Schmitz is author of both Sci-Fi/Fantasy Fiction and Nonfiction books and has been published in both traditional and independent outlets. If you’ve looked into indie writers of the upper midwest you may have heard his name whispered in dark alleys with an equal mix of respect and disdain. He has been featured on television broadcasts, podcasts, and runs a blog for indie authors… but you’ve still probably never heard of him.

​As an avid consumer of comic books, movies, cartoons, and books (especially sci- fi and fantasy) this child of the 80s basically lived out Stranger Things, but shadowy government agencies won’t let him say more than that. He lives in rural Minnesota with his family where he drinks unsafe amounts of coffee; the caffeine shakes keeps the cold from killing them. In his off-time he plays haunted bagpipes in places of low repute, but that’s a story for another time.